What is an ice maker? Well, that’s pretty obvious, but how do these brilliant machines work? Let’s take a look at the science behind these household appliances that most of us couldn’t live without.

The History of Ice Making

You might think that making ice is modern technology, but our ancestors had it figured out as early as 400 B.C. with the use of yakhchāls, an ingenious way to create and store ice in the middle of the desert. Throughout the ages, people learned how to "harvest" the ice during the winter months (does the movie Frozen come to mind?) and store it underground for months to come.

It wasn’t until the 1800s when the idea of artificial refrigeration and ice making came about, with several inventors racing to create the best prototypes. Some attribute the success to American physician John Gorrie, who created a refrigerator to treat yellow fever patients. Others credit Frederic Tudor, aka the Boston Ice King, and still others say it was Alexander Twining, who was awarded the U.S. Patent for the icemaker in 1845. 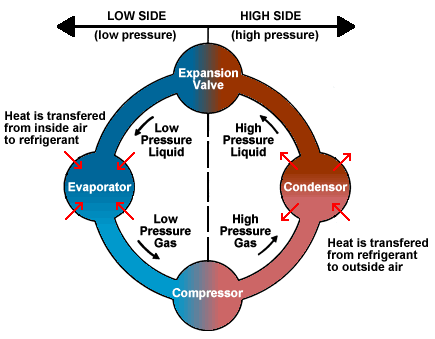 The four main components of a refrigeration system include the evaporator, compressor, condenser, and expansion valve.

This process allows a unit to mechanically remove warm air from one place and exchange it with cooler air to create a cooler or icebox.

Basic Components of an Ice Maker

Can water filters cause the ice maker not to work?

Yes, a clogged water filter can prevent your ice maker from creating ice. This is one of the reasons these filters must be changed every six months.

Common reasons your ice maker stops working include a clogged filter, a frozen/clogged water line, a mechanical malfunction, and the thermostat being set too low.

Will my ice maker work without a filter?

Some ice makers have a bypass plug on their waterline, that will allow the ice maker to function and water to flow without a filter being in place. Check your user guide to see if this applies to your ice maker.

How long do these ice machines last?

On average, you can expect your refrigerator ice maker to last 10-18 years. Commercial ice machines that are used every day will last 5-10 years, and portable ice machines for personal use will vary depending on usage, but you can usually expect them to be productive for at least 5 years.

How to defrost an ice maker?

If you don’t have the time to unplug your ice maker and let it defrost naturally, there are workarounds. Check out our guide to how to defrost a Samsung ice maker for some helpful tips that work across all brands.

How to reset an ice maker?

We’ve detailed in this article the various methods for resetting your ice maker.

How to clean and maintain ice makers?

Check out our guide to cleaning your ice maker. These simple steps maintenance steps will keep your ice maker working smoothly for years to come.

How do I unclog my ice maker?

Typically checking your trays, defrosting, and resetting are the keys to unclogging your ice maker. Check out this helpful video:

There is obviously a lot more science to how ice makers work that we didn’t get into, but now you know the basics of these extraordinary machines. We hope that you’ll use Plumbing Lab as your resource to the best ice makers on the market and your troubleshooting expertise.

We participate in the Amazon Services LLC Associates Program, an affiliate advertising program in which we earn advertising fees by linking to Amazon and affiliated sites. You can learn more here.

How To Plumbing Guides

How to Clean Gutters Easily