Rain shower heads are popular modern bathroom choices because they offer a comfortable, soothing downpour of water droplets while showering. However, it can be frustrating when homeowners turn their rain shower head off, and it continues to drip.

If you've been asking yourself, do rain show heads drip all the time, then you've come to the right article. Our guide will help you understand why your rain shower head drips after shut off and what you can do to fix it.

A rain shower head may drip naturally because the showerhead has a flat surface, and the water will not be "held" in the shower head the same way it might with shower heads that are tilted at an angle.

However, the rain showerhead should stop dripping within a minute after the shower has been turned off. If it continues to drip, then there is a bigger problem that you need to address. Continue reading for the most common rain shower head problems and what you can do to fix them.

Why Does My Rain Shower Head Drip After Shutting It Off? (Tips To Stop That)

If your rain shower head randomly drips, there are a couple of possible things that you can do to fix the problem.

One possibility for rain shower head dripping is that the seal isn’t tight enough. This is an easy solution that you can address on your own. Start by removing the shower head from the shower arm.

2. Washer (or O-ring) Needs To Be Replaced

Another aspect of a shower head seal is the washer or o-rings within the appliance. When you take apart your shower head, replace the washers and o-rings as well as replacing the plumber’s tape. This should give you a new, tight seal and help to avoid leaks.

If you are unsure what type of washers or o-rings you need, consult your shower head owner’s manual. You can also bring the washers and o-rings into a hardware store where the associate will point out the pieces you need to purchase.

If you purchased a cheap shower head, this might be the problem. Too often, leaks are associated with cheap or poorly manufactured products. Does your shower head use a lot of plastic? Are the holes for water too small?

If you purchased a cheap rain shower head, it may be time to upgrade to a more expensive and well-built model. Look for the materials used when purchasing your next rain shower head.

If your shower head is clogged, then it may drip long after the shower ends. One way to avoid this problem is to regularly clean the small holes in the shower head. To do this, take a toothpick and push it through each hole to help unclog each one.

Then use a disinfectant to clean the entire shower head. You can also soak the shower head in a cleaning solution to help loosen up any internal mineral deposits that are contributing to the clogged shower head.

5. Diverter Valve Has Been Damaged

You also need to replace the diverter valve with a new one. If you do both of these things, you should be able to have a leak-free shower experience.

The Impact Of A Leaky Shower Head On Your Home: Why It’s Bad

If you don’t fix a leaky shower, you will likely create other problems in your home.

One of these problems is reduced water pressure. If the shower head is constantly dripping, then there is a great possibility that the small holes in the shower head are partially or completely blocked.

The small drips of water coming from the shower head are there because they cannot completely wash out in a single stream of water when the water is shut off. This creates reduced water pressure because the water cannot flow freely through each small hole, and you are only getting a fraction of the water that you should be getting when you shower.

This can be frustrating when trying to wash your hair and rinse shampoo or conditioner out. These products get stuck because of the slow water pressure.

Another one of these problems is increased water costs.

If you do not repair your leaky shower head, you will need to shower longer in order to use the same amount of water because of the buildup around the small holes of the shower head.

Alternatively, if the leak is continuing to drip for hours after your shower, then you may have a plumbing problem that is allowing water to continue to move through your shower head.

This problem will require more water and therefore lead to increased water costs.

What To Do If You Can’t Fix A Leaky Rainfall Shower Head?

If you cannot fix your leaky rainfall shower head, you need to do one of two things:

If the reason you cannot fix your leaky shower head is because of an internal plumbing issue, then you need to call the plumber. This most likely will be a costly repair but does not have anything to do with your actual shower head, so replacing your shower head will not fix the problem.

If you know that the problem is an internal plumbing problem with your pipes or your water inlets, you need to have a professional plumber fix the problem.

You should be able to simply replace the shower head with a new one. This is an easy process and simply requires switching out the leaky rainfall shower head for the new shower head. 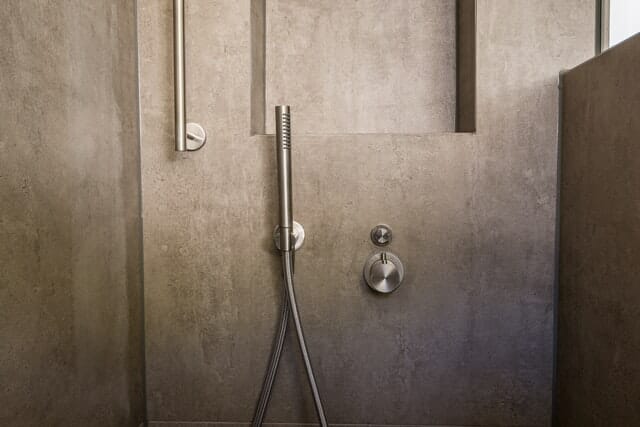 How much does it cost to fix a leaky shower head?

The average cost to fix a leaky shower head is $150 — $500. The rate varies depending on what piece of your shower head is not functioning properly. It also depends on the area that you live in and the standard cost for plumbers in your area.

Do rain showerheads use more water? Are they worth it?

No, a rain showerhead does not use more water than traditional shower heads. The water pressure from a rain shower head tends to be lighter, however, and you may need a longer shower when washing your hair.

Whether or not a rain shower head is worth it to you depends on how often you shower and how you like to shower. Many people prefer rain showerheads because of the comfortable, spa-like experience they provide at home.

How much does it cost for a plumber to replace a shower valve?

It typically costs approximately $250 — $400 to hire a plumber to replace a shower valve (several internal parts/the stem). If you need to replace the entire shower valve and not some internal components, then the typical cost may be closer to $500 — $700.

Rain shower heads are a great way to add a touch of luxury to your shower experience at home. The cascading water droplets feel good and create a spa-like sensation in your home. Fixing your dripping rain shower head is something you can do for yourself at home, and then you will be able to enjoy your shower again.

Josh enjoys researching, testing and diving into home improvement & DIY products. He has a passion for tools, learning new skills and fixing the everyday problems that arise around the house.

Josh enjoys researching, testing and diving into home improvement & DIY products. He has a passion for tools, learning new skills and fixing the everyday problems that arise around the house.